Fatty’s building was originally called The Colorado House. In 1894, this building was purchased by the Peabody family, who established a boarding house called the Colorado House, with a mercantile on the ground level and nine sleeping rooms upstairs. It was one of many boarding houses in Breckenridge in the late 1800s. Miners, merchants, professional men, tradesmen as well as women stayed here.

Often the boarding houses were run by a woman. She might have been a wife who was supplementing the family’s income by taking in boarders. She might have been a divorced or widowed woman with herself and a family to support. It was not uncommon for women to take in washing or to work as maids for the wealthier families in town. Some were hired as cooks or maids in hotels and restaurants. Running a boarding house was just an important extension of the work women did on a daily basis.

Mrs. Peabody managed The Colorado House. Times could get quite exciting in the boarding house- for instance, there is a piano with a bullet hole in it in the Briggle House that came from the Fatty’s building. The menu at the Colorado House included Blue Point oysters shipped all the way from the Atlantic Ocean. The Colorado House operated under the same name as a restaurant until the late 1970s, when it became Fatty’s Pizzeria.

It has been home to a boarding house and restaurant throughout the years, becoming Fatty’s, and a local institution, since 1975. It was purchased from the Jensens of Colorado Springs in 1975 and owned and operated by Richie Provoromo from 1975- 1981. The current owner, Southside Johnny, bought the restaurant from Richie in 1981 and is still the hands-on owner operator of this fixture of Breckenridge’s scene.

Over the years, Fatty’s became part of the famed “Devil’s Triangle” and the only surviving stop of the infamous drinking triangle of Breckenridge’s 1970s and 80s. Fatty’s golf tournament created something for locals to do back when summer was a very slow time of year and dogs slept on Main Street. Held before the Breckenridge Golf Course even was built, players “golfed” around town to various watering holes. Today this event continues on each September as a fundraiser for the Summit Youth Hockey.

As Fatty’s popularity continued to grow, Johnny decided to remodel and expand in 2002. For years, the restaurant only occupied roughly the area where the bar now is. Since this was a historic building, much care was taken to bring back the original look on the outside and to replicate historic looking but modernly functional elements, such as the windows. When visiting Fatty’s be sure to browse through the remodel scrapbook- it was quite the undertaking! 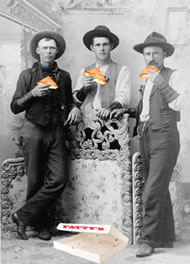 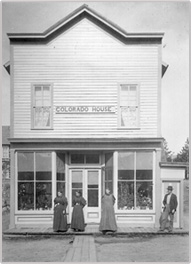 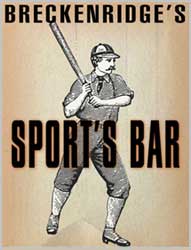